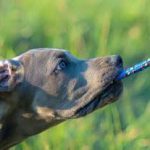 Many dog owners are under the impression that they should never play tug games with their dogs. Usually they have been told that it will cause aggression or that their dog will want to start tugging on their clothes and anything else they can get their mouths on once they’ve ‘had a taste’ of the game. Where these pearls of faux wisdom originate is a mystery but the truth is that Tug can actually be a very fun and useful training game as long as you and Rover play by the rules (all good games have them!).

The Rules Of Tug:

Use a long toy for tugging – minimum 1 foot, preferably 2. It has nothing to do with the size of your dog but rather the distance between you and your dog’s teeth while tugging.

To start the game, ask Rover to Sit and when he does, offer him the end of the toy by saying ‘Take It!!’ If he jumps up to grab it before being invited, just put it behind your back and ask him to sit again. Never encourage him to jump up and grab it by dangling it over his head.

Avoid strenuous movement on your part, just keep tension in the toy and let Rover do the rest of the work. All four of Rover’s feet MUST stay on the floor.

Do not move your arm up and down as this can injure your dog and avoid side to side – stick to forward and back (or just hold on and let him do all the work).

Every 10-15 seconds offer Rover a treat to trade (or say ‘drop’ in a friendly tone if you have taught him this cue). As soon as he gives it to you, reward him with the treat then ask him to sit and reward him with more Tug!

If at any point teeth touch you or clothing (even if just out of unbridled enthusiasm) just walk away. You do not have to ‘win the toy’. It will be very difficult for Rover to continue his favourite game without anyone holding on the other end of the toy!

The Benefits Of Tug:

It’s great source of exercise for your dog. Think cold winter days ahead….

When dealing with super nippy puppies it can be hard to find a way to play with them without getting bitten. Tug allows you to keep a nice wide buffer zone between their teeth and your hands!

Playing cooperatively together reinforces your bond to each other. If that weren’t enough, better bond means better listening across the board.

Is a great way to reinforce the trading game (or Rover’s ‘drop’ skill if you have taught it already)– he’ll be having so much fun playing he won’t even know you’re actually training him!

If you have a shy or timid dog go ahead and ‘let them win’ – it will help build confidence.