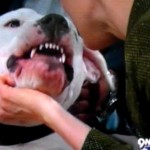 Last week a Denver news anchor was bitten in the face by a dog during a live interview with a firefighter who had recently rescued the dog from icy waters. The injury required reconstructive surgery and our hearts go out to her as we wish her a smooth and speedy recovery.

Watching the news clip I was reminded of a similar incident last year in which a reporter was also bitten in the face during an interview with a police officer and his working German Shepherd, Pedro. Luckily that incident resulted in only minor injuries but both serve as a reminder that there is a need to understand appropriate behaviour around dogs as well as how they communicate to us.

To the trained eye Pedro’s bite was entirely foreseeable and preventable. He gave a number of stress signals and warning signs leading up to it including flattened ears, lip licking and whale eye (whites of the eyes showing prominently) As you watch the clip (and try to ignore the sensationalist voice over), see how many of them you spot:

In both incidents the unfortunate victims were doing the exact same thing when the bite was sustained: hugging (holding/restraining), leaning over and moving in directly to the dog’s face.  Unfortunately in Pedro’s case, the bite was attributed to dominance and left at that.

In contrast, the Denver station is doing a wonderful service in helping prevent future tragedy by enlisting the services of Animal Behaviorist Dr. Suzanne Hetts for a week long feature educating the public on canine body language and safe greeting behaviour. Just as we humans have a socially acceptable protocol for greeting other humans, so do dogs and its important to learn the do’s and don’t’s of greeting dogs for everyone’s safety.

For your own guide to safe greetings, Dr Sophia Yin has created a wonderfully illustrated poster which I encourage you to download for free: How To Greet a Dog.