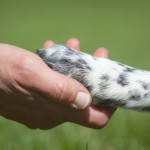 I recently spent several months deciding whether to switch from a PC to Apple’s new Macbook Pro. It wasn’t just the expense; after all, hadn’t I been using a PC for 20 years and always managed to get the job done? True, but there were EPIC battles along the way (those of you with Windows Vista can surely relate).  If I didn’t know better I would have sworn the machine was out to get me. Yes the job eventually got done but it wasn’t an enjoyable relationship and it often just stressed me out.

I love my new Macbook. It works smoothly, never makes me second guess myself by asking if I really want to do what I just said I wanted to do and it’s fun to use. My computer is no longer my adversary! And of course this made me think of how we work with dogs.

There still seems to be a widely held belief amongst dog owners that they must establish dominance over their dogs in order to obtain good behaviour, as though Rover were up nights plotting some grand coup to overtake the household. Yes, it’s true that you can punish/intimidate/correct anyone into behaving a certain way. But like me with my PC,  the adversarial relationship is limited and stressful.

Dogs can be taught to do the things we like fairly reliably and they are actually incredibly good students considering they have no predilection for verbal communication. At a recent gathering of some of the world’s best authorities on animal training and behaviour, the panel discussion topic was the concept of control in training and why it’s not only irrelevant but counter productive. They concluded – and I’m paraphrasing here – that giving up control is the best test of how good of a teacher you really are. This makes perfect sense when you consider that some of them work with large animals such as killer whales where collar corrections aren’t an option, trying one would get you badly hurt. Of course this wasn’t news to me – my petite frame and little voice aren’t terribly intimidating to most dogs – but it’s so simple yet profoundly  true I wanted to share it with you.

So the next time Rover misbehaves and you’re tempted to go to that ‘him vs. me’ place in your brain, ask yourself if you’ve been the best teacher you could be by:

If you can answer yes to all of the above, you will have a dog who wants to work for you, not one who is afraid not to. And don’t hesitate to try it with the people in your life too – happiness guaranteed!